Sports are a complicated mix of emotion and business. Fans can grow attached to legendary players that help their team win for years and strengthen the bonds of fandom.

Most fans would like to see those players stay on that team for their whole career. But unfortunately, sports are still a business, and sometimes that business causes players to move on, whether via free agency or by trade.

Kyle Lowry is no exception to this rule for the Toronto Raptors. He spent nine memorable years with the team, and his legacy became iconic when he helped lead the team to their first and only championship in the 2018-19 season.

Lowry coming back to Toronto in Heat black and orange

But this year, Lowry signed with the Miami Heat and will return to Toronto to face the Raptors next week, if he’s available. The Raptors are improved to a middle-of-the-pack team without Lowry, though the Heat are now bonafide contenders.

According to Proline Plus sportsbook, the Ontario sports betting government-run operator, Miami is a 14.00 (+1300 American equivalent) bet to win the NBA title.

It can hurt fans seeing their once favourite player in an opposing uniform, trying to defeat their old team. For better or worse, fans are not allowed at Scotiabank Arena for the Feb. 1 Lowry reunion because of COVID-19 restrictions. Short of going to the game though, Lowry superfans can get some nice new gear out of it, as adidas Canada has released a celebratory line.

Fans of Canadian teams have experienced this conflict before. Here are five of the most painful examples.

Roy is one of the greatest goalies in NHL history and had loads of success with the Montreal Canadiens while establishing his own legacy in the sport. He spent his first 11 seasons in Montreal, winning two Stanley Cups with the Habs. The latter Cup came in 1993, somehow the last one hoisted by a team north of the border.

But then, Roy was traded to the Colorado Avalanche early in the 1995-96 season. Roy already had a rocky relationship with former teammate and new Montreal coach Mario Tremblay, made worse during the backdrop of a humiliating 11-1 loss to the Detroit Red Wings. 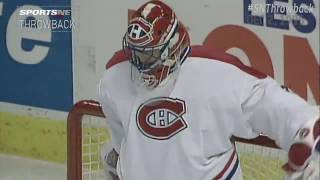 Roy and Colorado won the Stanley Cup that season and added another in 2000-01.

The Avalanche did not play a road game in Montreal until the middle of the 1996-97 season. Roy returned to Montreal on March 5, 1997, and while he allowed three goals amongst 37 shots on goal, the Avalanche were dominant in a 7-3 victory.

Along with Lowry, Vince Carter is truly one of the greatest players in Raptors history. He spent his first six years with the Raptors and became an iconic player for the franchise. He blossomed from a dynamic dunker early in his career to one of the NBA’s best in a short time.

Unfortunately, the Raptors traded him to the then-New Jersey Nets early in the 2004-05 season. The ending was a bitter one, as Carter was perceived as giving up on the team to force a trade.

The two teams met once in New Jersey that season before Carter’s Toronto reunion could take place. That happened with just four games to go in the Nets’ season on April 15, 2005. At the time, the Nets were trying to secure a playoff spot and hold off a young LeBron James and his Cleveland Cavaliers.

The boos came in a major way from the Toronto faithful with some fans wearing #15 bibs and derisive “CAR-TER, CAR-TER” and “Carter sucks!” chants coming with gusto at Air Canada Centre.

But Carter came up clutch in his return to Toronto as he put up 39 points in his former home and led the Nets to an 11-point victory. They ultimately made the playoffs via a tiebreaker with the Cavaliers as the 8-seed, where they were swept by the Miami Heat.

Like Roy, another hockey legend that broke Canadian hearts with his departure was Messier. He was the Great One’s partner in crime as the two led the Edmonton Oilers to four Stanley Cups in five seasons.

Messier spent an additional three years on the Oilers after Gretzky got traded in 1988 and picked up his fifth Stanley Cup in the 1989-90 season.

The departure was made worse by the fact that Messier was an Alberta native by way of the Edmonton suburb St. Albert.

After a long pre-game standing ovation, Messier had a direct impact (the 900th game of his career), scoring the game-winner and tallying an assist to lead the Rangers to a 3-1 victory. Two years later, Messier famously led the Rangers to the Stanley Cup and ended that team’s long championship drought.

That run came the season after the last Canadian team to bring the Cup back home.

Meanwhile, the Oilers have never really regained their footing as a franchise, though the outstanding Connor McDavid provides hope for the future.

“Doc” Halladay was an absolute stud for the Toronto Blue Jays and earned the 2003 Cy Young Award in Ontario. The late fireballer was known for putting up big starts and did so for Toronto during his first 12 seasons.

However, he was traded by the Blue Jays to the Philadelphia Phillies before the 2010 season. Halladay added on to his legacy by putting up a historical no-hitter in the playoffs that season. It was only the second in MLB history after Don Larsen’s perfect game in 1996. He also racked up a second Cy Young Award that regular season.

Philadelphia ended up having an inter-league game in Toronto one year later. Halladay started the game on July 2, 2011, and reminded the Blue Jays of what he used to do in their uniform.

He pitched a complete game that day while only allowing three earned runs in a 5-3 victory for the Phillies. 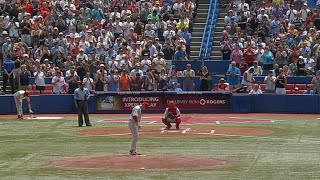 The player that has to have broken the most Canadian hearts was Wayne Gretzky. Many know him as the greatest hockey player in NHL history. Gretzky holds records for most goals (894), most assists (1,963), and most points (2,857).

He spent 10 seasons in Edmonton and, along with Messier, led the team to four Stanley Cups in five seasons. However, the Oilers ended up trading him to the Los Angeles Kings after the 1988 season in a blockbuster known now just as “The Trade” in hockey circles. A financially strapped small-market owner and Gretzky’s wife, Janet Jones, allegedly pushing for an LA-sized assist for her acting career were among the subplots.

There would be another notable meeting with Gretzky against the Oilers, and that was in the first round of the 1988-89 Stanley Cup Playoffs. There, the Kings fell behind 3-1 but won three straight to move on against the defending champion Oilers.