The Canucks had a so-so campaign in 2021-22, finishing fifth in the Pacific Division, but just missing the cut for the playoffs. In the off-season, the team lost 10 players via free agency and acquired seven new players. That amounts to a lot of change for the roster.

Fans can have their ultimate say about the group by placing a bet on how Vancouver fare.

With single-game betting now available in Canada, NHL betting odds are the talk of the country. Here’s a look at Canucks betting odds, from odds on tonight’s game to odds on the Canucks to make the playoffs or win the Stanley Cup.

See below for current Vancouver Canucks odds as posted at legal online sportsbooks. You can also see the latest Canucks futures odds (Stanley Cup, conference, division) and select player props. Click on any odds to go directly to the sportsbook, open an account and start betting.

Next Up: New York Rangers

Betting Insights For The Rangers Game

Betting Lines And Odds For Canucks Vs. Rangers

Recent Meetings With The Rangers

Injuries For Vancouver Vs New York

How to bet on the Canucks

Here is a rundown of some odds and sports betting terms you should know when betting on the NHL at Canadian online sportsbooks including PointsBet Sportsbook Canada and MGM Sportsbook Canada:

Check out the odds feed above for daily puck lines, moneylines and totals on the Canucks’ upcoming matchups. For daily game lines and futures odds for more Canadian NHL teams, check the pages below:

Canucks in the Stanley Cup playoffs

The Canucks’ first significant playoff run was in 1982. Led by legendary forward Stan Smyl, their Cinderella run ended in the Stanley Cup Final with a four-game sweep at the hands of the heavily favoured New York Islanders.

The 1990s marked the Canucks’ return to prominence. With a roster highlighted by offensive stars Trevor Linden and Pavel Bure, in 1994 Vancouver made its second trip to the Stanley Cup Final. This time, the Canucks were bested by the New York Rangers in a demoralizing 3-2 loss in Game 7.

Other major talents have since suited up for the Canucks, from Markus Naslund to Roberto Luongo to Henrik and Daniel Sedin, but they’ve never quite managed to put all the pieces together to win a championship. Their last appearance in the Stanley Cup Final was in 2011. The result was another Game 7 loss.

The Canucks have a long history of success finding gems in the later rounds of the draft, including Kevin Bieksa (third round, 2001) and Alexander Edler (third round, 2004). But their greatest draft-day steal to date has to be their selection of legendary Russian forward Pavel Bure in the sixth round of the 1989 entry draft.

Here are some of the Canucks’ notable selections from recent drafts:

The Canucks are led by Head Coach Bruce Boudreau, who took over in the 2021-22 season from Travis Green, who had been with the team since 2017. Boudreau is supported by the Canucks’ assistant coaches: Scott Walker, Kyle Gustafson, Brad Shaw and Jason King. Ian Clark is the goaltending coach, and Darryl Seward (video) round out the staff.

Since joining the NHL in the 1970-71 season, the Vancouver Canucks have had 19 head coaches. Alain Vigneault (2006-2013) has the longest tenure to date, serving as the head coach for 540 games. Vigneault is also the Canucks’ winningest head coach, with 346 victories.

Here are the Canucks’ records under some of their most successful head coaches:

While primarily used for Canucks home games, Rogers Arena is also the home base for the Vancouver Warriors of the National Lacrosse League and regularly hosts concerts and other sporting events, including hockey during the 2010 Olympic Winter Games.

Rogers Arena was the former home of the NBA’s Vancouver Grizzlies until the team relocated to Memphis, Tennessee, for the 2001-02 season.

Rogers Sportsnet is the official TV broadcaster of the Vancouver Canucks. John Shorthouse provides the play-by-play for the Sportsnet Pacific broadcast team, alongside colour commentator John Garrett. Dan Murphy serves as the studio host and the rink-side reporter for home games.

On the radio, the Canucks’ flagship station is Sportsnet 650 AM. The radio team features play-by-play announcer Brendan Batchelor, colour commentator Corey Hirsch and studio host Satiar Shah. Listeners can also tune into Canucks broadcasts on HD receivers at 96.9 FM-HD3, as well as on the Sportsnet app, the Radioplayer Canada app or by streaming live on Sportsnet.ca/650.

How to stream Canucks games

You can pay to stream Canucks games through Sportsnet NOW. If you have Sportsnet as part of your TV package, you’ll have the option to sign into the streaming service via your TV provider.

Canucks games featured on CBC for Hockey Night in Canada are available to stream for free on cbcsports.ca and through the CBC Sports app.

What is the Canucks’ logo, mascot and jersey?

The Vancouver Canucks made their 1970 NHL debut sporting blue, green and white jerseys. Their logo at the time depicted a stylized hockey stick against an ice rink that formed the letter “C” for Canucks.

For their 1978-79 season, the Canucks made the switch to their infamous black, gold and orange colour scheme. The logo became a flying “V” for Vancouver. This design was tweaked over the next several seasons and, in 1989, the team introduced a flying skate logo.

The last major change came in 1997, when the team unveiled a logo that featured a Haida-styled orca jumping out of an ice-covered letter “C”. Subtle updates have continued, but the Canucks currently sport jerseys with the orca logo in the team’s current colours of blue and green.

Fin the Killer Whale is the mascot of the Vancouver Canucks. He is an anthropomorphic orca who debuted during the 2001-02 season. Fin is one of the few NHL mascots who plays the position of goaltender.

Below are three of the most crushing moments for the Canucks and their fans in recent history:

2011 marked another Stanley Cup Final for the Canucks and another seven-game series loss. Playing against the Boston Bruins, the Canucks blew a 3-1 series lead and fell 4-0 in Game 7. As in 1994, the loss sparked rioting in Vancouver. 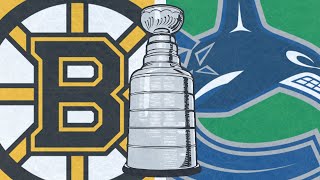 In the Canucks’ second trip to the final round of the Stanley Cup, they faced off against the New York Rangers. The Canucks bounced back from a 3-1 deficit only to lose by one goal in Game 7, the most agonizing of margins. Fans rioted in the wake of the Canucks’ defeat. 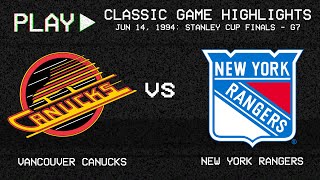 It was the end of an era when the legendary Sedin twins, Daniel and Henrik, retired at the end of the 2017-18 season. Drafted together in the 1999 NHL entry draft, they spent all 18 seasons of their NHL careers as Canucks. 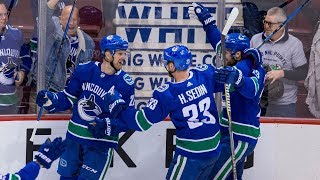 Canucks franchise by the numbers